About 17,250 Bitcoins or $89 million were withdrawn from the cold wallet of the crypto exchange Bitfinex today. At the time of publication, the balance of the wallet account is still 102,285 BTC ($525 million).

It is not known where these funds go and whether the transfers were initiated by Bitfinex itself or its clients.

The nature of the transfers, which, in particular, draws attention to the Twitter account Whale Alert, makes it possible to suggest that they may be followed by customers who fear the further negative development of the situation around the cryptocurrency exchange. 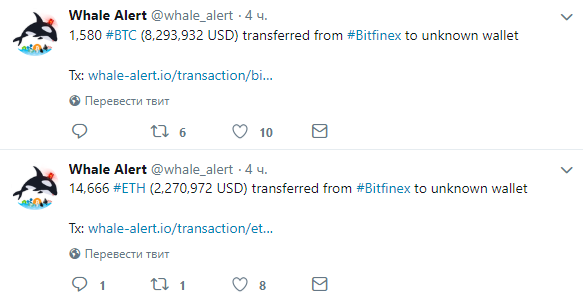 In addition to BTC transactions, at least six large outgoing transactions of Ethereum totaling about $75 million were noted, Bitcoinist reports.

The events are unfolding against the background of the accusation made by the state prosecutor’s office of New York against Bitfinex and its affiliate issuer stable coin Tether.

Bitfinex reportedly lost $850 million after it sent them to the Panamanian payment operator Crypto Capital Corp. As a result, the funds were either lost by this company or simply stolen. But the operator iFinex (the company behind the Bitfinex) had to cover losses, using reserves of stable coin Tether.

“Our team is reviewing the documentation and we will be back to you with a statement in the following hours. Thank you”, — wrote the representatives Bitfinex exchange on Reddit site.

Japan Will Present a Universal Solution for Cryptocurrency Regulation at the...