BY MARKO VIDRIH: The Bitcoin network hash rate has risen to the highest level since the end of October 2018, while the weighted average price of BTC has exceeded $5,800.

According to the Blockchain.com portal, at present, miners have allocated computing powers in the amount of 58 million tera hashes per second to ensure the safety of the Bitcoin network. For all the existence of cryptocurrency, this value was at comparable levels only in the middle and the end of 2018.

After a decline in November and December last year, against the background of falling cryptocurrency prices and a massive shutdown of miners, the Bitcoin hash rate began to gradually recover, until it made a noticeable jump in recent days.

Together with the hash rate, the mining complexity indicator is growing, which has not yet had time to react to recent changes. Now the complexity of Bitcoin mining is comparable to the levels of August 2018, when BTC cost about $7,000. 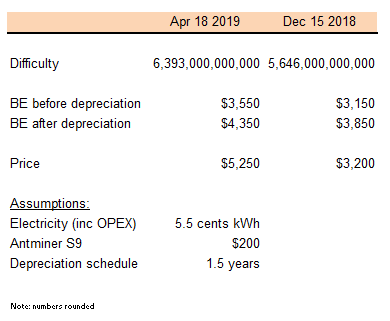 According to analyst Alex Kruger, the break-even point of Bitcoin mining in mid-April was at a price level of $3,550. Thus, the increase in hash rate was the response of miners to the improvement in the market situation.

Co-Founder of the Cobinhood Exchange Reported to Police over Safety of...

Tether Lawyer Admits That USDT Is Only about 74% Backed by...