Before the Channel Tunnel opened in 1994, London to Paris and back in a day was out of the question for all but millionaires, politicians, and airline crew. With the 25th anniversary of the Eurostar on the horizon and improved traveller services, faster tracks, and advance purchase specials, a day trip is becoming increasingly attractive to the time-poor visitor.

For those visiting England, the additional time and expense involved in a dedicated trip to France may not fit all schedules or budgets. Now you can unleash your inner Clark Griswold and take some pleasure in a day crammed with culture, history and fromage. Depending on your preferences you can either extend or drop any of the sites described in this suggested itinerary. 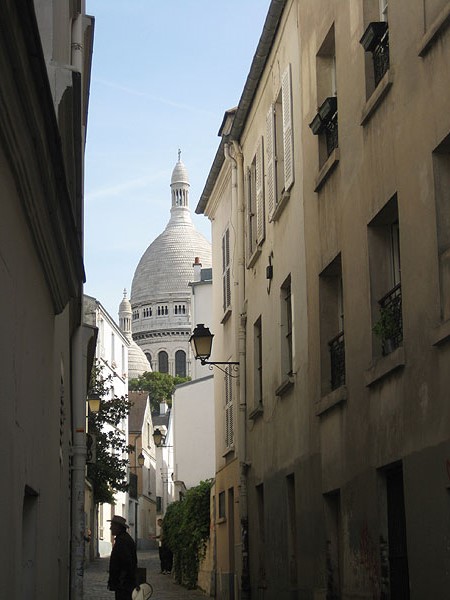 The first scheduled service from St Pancras International rumbles off toward the coast bright and early. Assuming you’ve already printed off your boarding pass, you’ll still need to arrive at least 30 minutes beforehand to grab a pain-au-chocolat and double-shot latte, then run the gauntlet of barriers; a security scan, UK passport control and French customs – quite similar to those you might encounter in an international airport (without the confiscation of liquids).

The darkness of the tunnel lasts about 20 minutes. If you’re squeamish about descending into a 50km tube under the sea, just breathe and imagine you’re on a night train. This may also be a good time to run through your itinerary, and check the routes linking the sites on the map. Surfacing in French territory at Coquelles, near Calais, set your watch forward an hour to account for the difference in time-zone. The country side is picturesque; agricultural with small medieval villages interspersed with factories and warehouses servicing the megalopolis Paris has become. Take a good look, as it will be dark when you return.

As all customs and immigration requirements were handled in London, you’re free to walk off the train and straight into the streets of Paris. Exit the platform and follow the signs on the left, down the stairs to the Paris Metro. Find a quiet ticket machine and buy a one day ‘Visite Pass’, valid for zones 1-3 of inner city Paris. Don’t be afraid to take your time and stand your ground if a busy Parisian starts to grumble behind you. All metro routes are marked by colour and number, and the direction the train will travel is identified by the route’s final station at either end. Get the magenta metro line (4) in the direction of Port De Clignancourt. 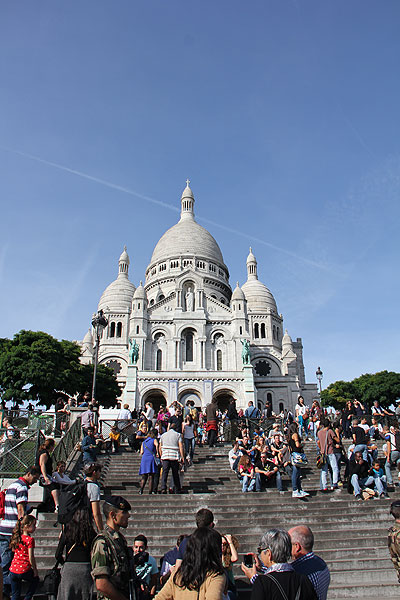 This is a logical first stop as it’s close to Gare du Nord, and is a more enjoyable experience before the inevitable daily crowds converge. Most visitors approach via the Metro stations Pigalle and Abesses, but for a different perspective of ‘Le Butte’ exit at Metro Chateau Rouge. It’s a quicker trip from Gare Du Nord, and there’s no metro change required. Walk west up the quiet but appealing Rue Poulet and Rue Muller. Resist the cute café’s if you’re able and ascend the trademark Montmartre steps, emerging in front of the magnificent Sacré-Cœur. This route also avoids the hordes of pushy touts at the foot of the steep, meandering gardens. 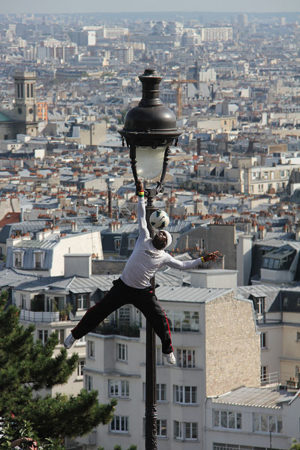 The Basilica of the Sacred Heart of Paris provides one of the most spectacular views of the city. On weekends, the talented and highly organised buskers start early, so take a seat on the famous steps and enjoy the comic mimes, musicians, and the amazing soccer acrobat who entertain millions each year. The cathedral’s interior features a beautiful mosaic, accompanied by an air of peace. It’s a place of worship, so keep your visit short unless you have arranged time to join the tour to the Basilica’s dome via the 234 step spiral-staircase.

Follow your nose into Montmartre village via the western wing of the Basilica, and plant yourself under the awning for a coffee at Au Cadet de Gascogne, watching the artists set up for the day as tourists spill into the narrow cobbled streets like Pampolonians fleeing the running of the bulls. Push on against the flow along Rue Norvins past the postcardesque Le Consulat and start your descent.

Follow the worming Rue Le Pic down through Amelie territory, blending in with the locals going about their business. Look out for the wall marker on the left at number 54 which indicates the former residence and studio of Vincent van Gogh (1886 – 1888). Stop in at Les Fromages De Marie for picnic lunch supplies of fresh baguette, cheese and olives, and if your arteries can stand it, a ‘crosssausageroll’ – you guessed it, a traditional flaky croissant wrapped around a smoky Andouille sausage. At best, it’s a decadent treat you will surely work off over the course of the day, at worst it will seem like a good idea at the time. At the bottom of Rue Le Pic you’ll find the celebrated Moulin Rouge. Take your photos, then jump on the blue (2) metro line at Blanche, heading in the direction of Porte Dauphine.

Periscope up from the metro at Charles de Gaulle – Étoile, taking a moment to absorb the barely organised traffic chaos that swirls around the Place Charles de Gaulle, admiring the combination of skill and daring displayed by Parisian motorists. The Arc de Triomphe is best appreciated up close and accessed by underground tunnel from Avenue de la Grande Armee on the western side of the monument. Feel the smooth limestone and hold your fingers in place long enough to let some of the Arc’s 200-plus years of history seep in. Spreading eastward is a classic slice of old Europe; the Champs-Élysées. Broad and tree-lined, this popular boulevard, now dominated by restaurants, designer chains and mobile phone outlets has seen its fair share of celebrities, dignitaries and dictators. Return to the metro and take the teal (6) line heading in the direction of Nation, alighting at Bir-Hakeim. 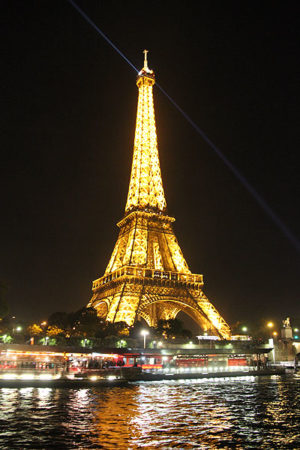 For the efficient traveller who has bought into the Paris-in-aday concept, this stop poses the greatest threat to the success of the day. Queuing to climb the tower starts early, and factors such as the weather, time of year and efficiency of the French attendants to shuffle tourists along on any given day will all affect the line’s length. Purchase a ticket online and print it at home to save time. On a busy day, the stairs (rather than the elevators) to the second level are your best chance to witness one of the world’s truly wonderful city views.

Champ De Mars is a perfect a spot to eat your well-deserved picnic lunch. When you’re done, Metro École Militaire is a short walk along Place Joffre. Take the lavender (8) line in the direction of Créteil – Préfecture to Concorde metro station. 2:15 pm Musee L’Orangerie

Walk towards the river along the east wall of the Place de la Concorde, enter the grand park gates and follow the rise up and around to Musee L’Orangerie, This low key gallery is one of Paris’s favourites. The two oval-shaped rooms featuring Monet’s permanent Water Lilies murals are a tranquil place to sit and catch your breath while devoting a few moments out of your busy day to personal reflection.

If the sun’s out, find a reclined chair and feed the ducks while eating an ice cream from the concession stand. Continue east through the gardens to the Louvre.

It’s unrealistic to expect to see the entire Louvre collection in a short visit, so hire the audio guide (note that all plaques are in French) and choose a manageable highlights package depending on your artistic preferences. The ‘Masterpieces’ tour includes Venus de Milo, the Mona Lisa and French classic Raft of the Medusa, and is comfortably achievable in 60-75 minutes.

A 15 minute walk along the north bank of the Seine is the most practical way to reach the famed cathedral. Lean against the statue of the infamous ‘Father of Europe’, Charlemagne and take in the detail in the stone masonry of Notre Dame’s western façade. Entry is free, and on a lucky day you might quietly slip into a pew and hear the amazing acoustics at work during an organ recital. 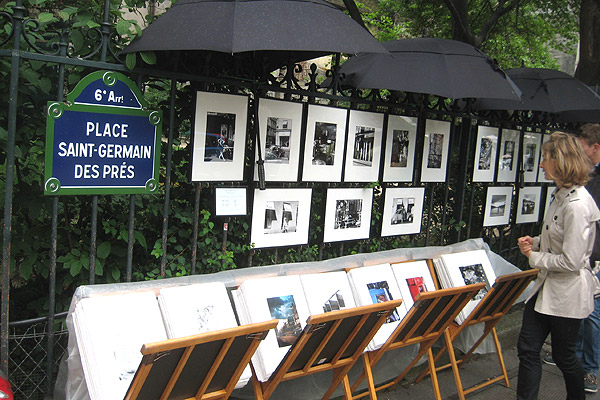 The Seine Left Bank has hosted bookstalls along the nearby stretch of Quai de Montebello for centuries. Selling publications in French, English and other languages, the Bouquinistes generally close at dusk. Cross the Pont au Double bridge from Notre Dame, and take the opportunity to check out the Shakespeare and Company book shop on the way.

There are many cute restaurants in the back streets of the Latin Quarter, equally charming on a warm spring evening or when lit up on a chilly winter’s night. Rue de la Harpe is close and has many options for a quick meal that somehow doesn’t feel rushed.

A river cruise is a must at any time of year. Enjoy old jazz and the rush of cool air as you pass under the ancient stone bridges in summer, or pass around a sneaky bottle of red while your vessel’s spotlight searches out frozen lovers midembrace during the colder months. Cruises are generally one hour and start at 10 euros. Several operators depart from the Left Bank stretch between the bridges Petit Pont and Pont de’lArcheveche.

Jump on the metro at St-Michel, and take the magenta line (4) in the direction of Porte de Cligancourte to Garde du Norde.

If all goes to plan you’ll arrive with about half an hour to negotiate security and immigration for your return trip. Slump into your chair and let the Eurostar do the rest, remembering to wind your watch back an hour when you touch British soil. 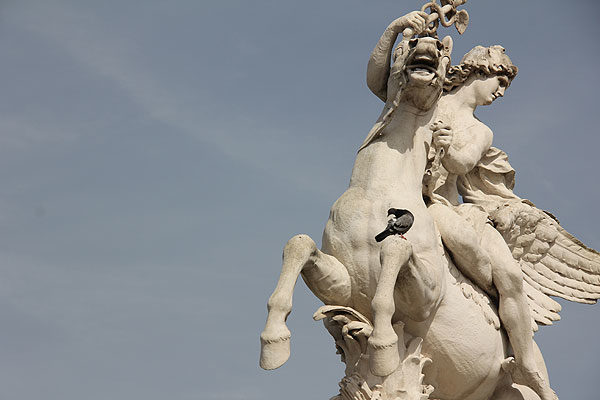